The demand for clean, cost-effective renewable natural gas (RNG) as a transportation fuel continued to rise in 2019. In the third quarter of this year alone Clean Energy realized 6.8 million gallons in new fuel contracts, along with an increase in contracts for station construction, fueling infrastructure upgrades and service agreements.

From California to New York, communities with some of the worst air pollution in the country will breathe a little easier this year because more fleets made the switch from diesel fuel to heavy-trucks equipped with natural gas engines powered by Clean Energy’s Redeem™ RNG.

A renewable fuel produced from organic waste, Redeem not only addresses short-term air quality issues caused by diesel, but is a carbon-neutral alternative that greatly reduces the amount of greenhouse gas (GHG) produced by vehicles.

Recognizing that renewable fuel is the most immediate solution for a clean-air future, in 2019 Clean Energy announced its own bold sustainability goals that include offering zero-carbon Redeem at all of its fueling stations by 2025, which is 20 years ahead of California’s electric grid. In doing so, Clean Energy will outdistance other alternative fuels, including electric vehicles, which are not expected to hit that mark until 2045.

Let’s take a look at Clean Energy’s plans to further the availability of this forward-looking alternative transportation fuel, and how the greater acceptance and wider adoption of Redeem positively impacted both businesses and municipalities in 2019.

In 2019, Clean Energy announced ambitious sustainability goals and a path to 100% renewable, zero-carbon portfolio, as outlined in these three initiatives:

As a powerful partner in the fight for clean air, Clean Energy pledged to reduce the carbon-intensity of its renewables portfolio to zero-carbon by 2025. This is 20 years ahead of California’s 2045 goal of transforming the state’s power supply to 100% renewable energy.

Dedicated to providing the cleanest fuel available, Clean Energy established the goal of expanding its renewable fuel offering to all of its stations and its customers’ stations by 2025.

Clean Energy is committed not just to sourcing the cleanest fuel available, it is dedicated to having the cleanest natural gas fuel supply chain. Given this, Clean Energy has established a goal of reducing its companywide carbon footprint by 25 by 2025.

In 2019 United Parcel Service Inc. (UPS) agreed to buy the equivalent of 170 million gallons of renewable natural gas from Clean Energy over a 7-year period, in what the company described as the biggest-ever deal involving the alternative fuel.

UPS has used more than 28 million gallons of RNG in its ground fleet since 2014 and with this agreement will be increasing it five-fold. By switching from diesel fuel to RNG, UPS vehicles fueling at 18 company-owned and operated natural gas stations across 12 states will realize a significant reduction in greenhouse gas emissions, as much as 1,074,000 metric tons of GHG over the life of the agreement.

Redeem will be a key part of UPS’s strategy to increase alternative fuel consumption to be 40% of total ground fuel purchases by 2025, supporting the logistics leader’s efforts to reduce the absolute GHG emissions of its ground fleet 12% by 2025.

The station is in close proximity to Hunts Point Market where fleets generate approximately 15,0000 truck trips per day. The availability of a lower-cost alternative to diesel fuel can result in substantial reductions in truck-related pollution and greenhouse gases in the region. For example, 100 trucks running on RNG can lower GHG as much as 9,294 metric tons annually. This is equivalent to planting 237,942 trees, removing 1,961 cars off the road or recycling 3,331 tons of waste that would otherwise be sent to the landfill. 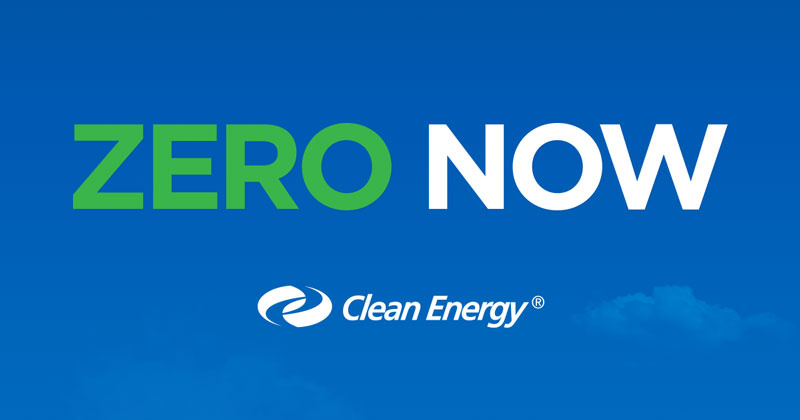 In 2019 trucking firms opted to lease or purchase more than 250 new heavy-duty trucks fueled with Redeem RNG through Clean Energy’s Zero Now, a program that makes the cost of leasing or purchasing a new natural gas heavy-duty truck equal to the price or even lower than that of the same truck equipped with a diesel engine. In addition, truck fleets financed or purchased through Zero Now are eligible to purchase Redeem fuel with a fixed discount to diesel at a significant spread for the duration of the contract.

With financing made available by Zero Now, along with grant programs available in many states, trucking companies are rolling out trucks equipped with the new Cummins-Westport (CWI) ultralow NOx ISX12N natural gas engine, which provide the same torque and reliability as their diesel counterparts. The ISX12N is certified by California Air Resources Board (CARB) to reduce smog-forming NOx emissions by 90% compared to the current engine standard.

Among the first fleets taking delivery was Kenan Advantage Group, the nation’s largest leading bulk carrier, which has added 24 new near-zero trucks to its fleet through Zero Now.

Recycling and solid waste company Republic Services in 2019 strengthened its commitment to reduce fleet emissions, announcing an expanded adoption of Redeem that resulted in the widest geographic usage of RNG fuel in North America.

A growing number of Republic Services’ natural gas-powered vehicles will utilize increasing amounts of Redeem fuel across 21 states over the next five years. This is projected to reduce fleet emissions by roughly 250,000 metric tons of CO2e (carbon dioxide equivalent) per year, which is equal to taking 53,000 passenger vehicles off the road.

Meeting the challenge to clean up some of the most polluted air in the country, Southern California has hit a new milestone—over 100 trucks outfitted with the cleanest ultra low-carbon engines available are now operating in the Port of Los Angeles and Port of Long Beach.

Visionary port trucking companies are leading the transformation from diesel to clean trucks that are equipped with the ultralow-NOx Cummins Westport (CWI) ISX12N engine and fueled with Clean Energy Redeem.

Clean Energy has begun a major fueling infrastructure upgrade for trucks operating in the Port of Los Angeles and Port of Long Beach. The upgrade will increase the availability of Redeem at the nation’s largest alternative fuel station in America’s largest port complex.

For an in-depth look at Clean Energy news in 2019 please visit our Press Room here.