Soon the Ports of Los Angeles and Long Beach will adopt policies that determine the future of port trucks. Some stakeholders will argue for policies that prioritize business and port competitiveness over health. Others will advocate for policies that only focus on a zero emissions future. Ironically, these positions both perpetuate the status quo of old diesel trucks and their associated emissions of air and climate pollutants.

In the first of a three-part series, Clean Energy Vice President Greg Roche, explains the reasons why we need to immediately deploy this advanced clean technology:

1. We have the unhealthiest air in the nation.
2. Climate crisis requires immediate action.
3. Olympians breathe LA air in 2028

1. We Have the Unhealthiest Air in the Nation

The Los Angeles area has the most polluted air in the country. The area has held this title for so long that perhaps we are numb to this reality. The area holds this title despite decades of progress in reducing emissions from everything from factories to vehicles. The American Lung Association publishes an annual State of the Air report that ranks communities by air pollution. The 2019 State of the Air Report shows that the Los Angeles – Long Beach area:

Air pollution causes respiratory illnesses like asthma, cancer, heart disease, premature death, and many other afflictions. Too many lives are being harmed to accept air pollution as the status quo. Headlines paint a grim picture. From the Long Beach Post: “Long Beach and Los Angeles took the top two spots as the worst in the nation when it comes to air quality, according to a report that included the 100 most populated cities in the country by the national chapter of the American College of Sports Medicine.”

From the Long Beach Press Telegram: “The Long Beach Freeway has had many names in its storied history. It started out as the Los Angeles River Freeway decades ago before finally being designated as the 710 and Long Beach Freeway. But the clogged freeway also has more notorious names, like “Diesel Death Zone” and “Asthma Alley.””

Much of the air pollution is caused by the thousands of big rig diesel trucks that haul goods throughout southern California. Despite clever marketing slogans like “Clean Diesel”, diesel emissions are a major air pollution problem. According to the California Air Resources Board (CARB), diesel exhaust is responsible for 70% of the cancer risk from airborne toxics. The Ports of Los Angeles and Long Beach conduct annual emissions surveys for port-related operations and find that diesel port trucks are the #1 source of climate pollutants and the #2 source of smog-forming NOx emissions. BreatheLA is calling for California to ban diesel now.

Not a day goes by without lofty aspirational goals and proclamations to take actions to fight climate pollution decades in the future. They usually are along the lines of “by 2050 we will…”. There is cognitive dissonance at work with these proclamations. Either we have a climate crisis, or we don’t. If there is a climate crisis, then the science says that immediate near-term actions are far more important than actions taken way in the future. Climate pollution is a cumulative problem, waiting too long for perfect solutions will simply be too late. 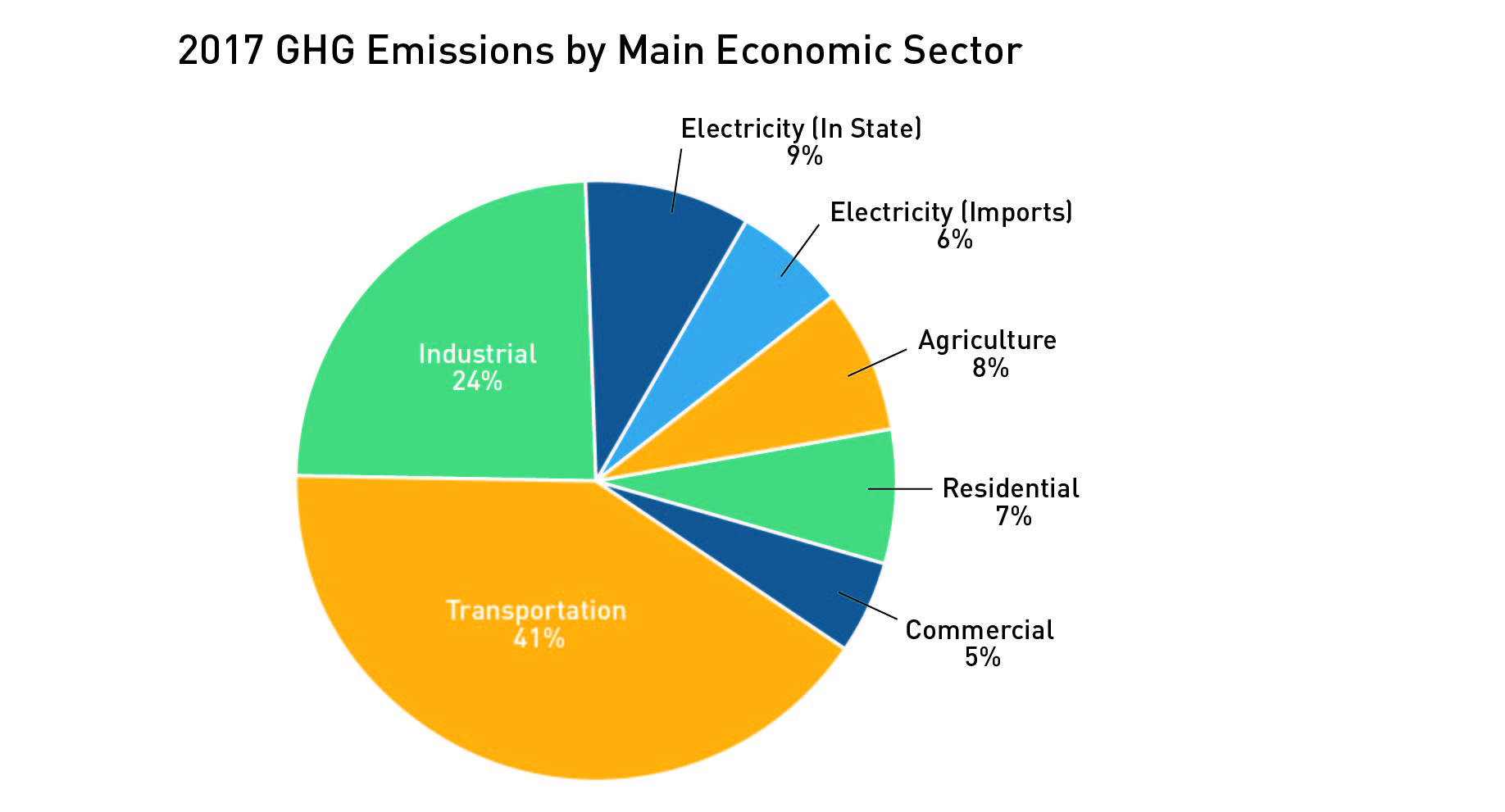 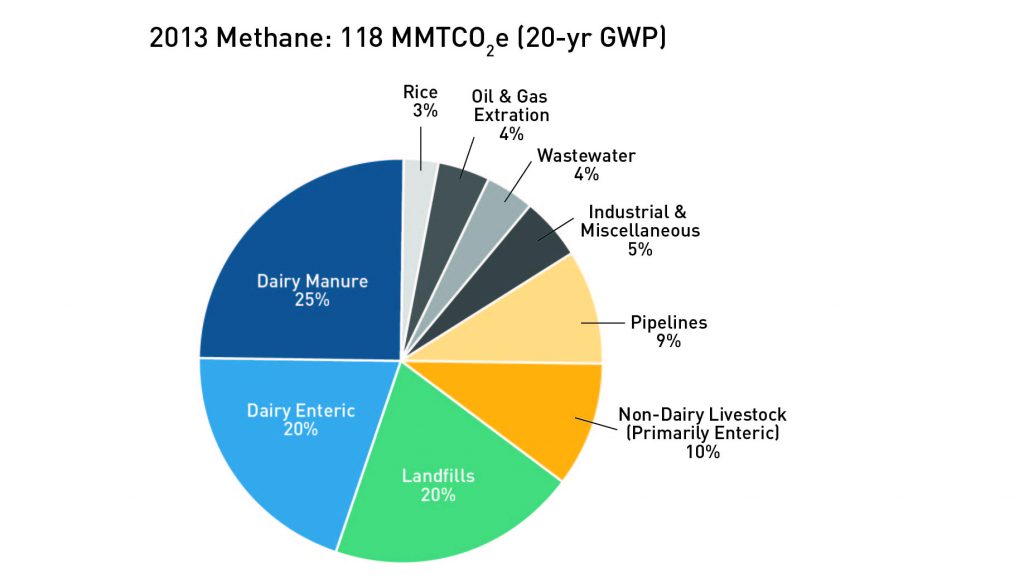 There is opportunity in these methane emissions. Methane is the same energy compound in natural gas. Capturing the methane before being emitted has a dramatic benefit for reducing climate pollution. Using this captured methane to substitute for conventional methane in natural gas has the double benefit of displacing a fossil fuel. The result is replacing a conventional fossil fuel with a recycled renewable fuel. Going back to the earlier point that transportation is the largest source of GHG emissions, vehicles and particularly big rig trucks can run on renewable natural gas (RNG) instead of diesel. According to CARB, using RNG as a vehicle fuel is the lowest carbon transportation option available, even lower than electric. In fact, some RNG sources are carbon-negative with reductions of over 400%, giving us subzero carbon fuel.

The Olympics come to town in 2028, only 9 years away. The question for the region is what to do about air pollution in 9 short years. Recent Olympics have been plagued by environmental issues. These headlines didn’t reflect well on the host cities, headlines that were seen around the world:

“Severe water pollution clouds the Olympic games in Rio”
“Beijing Olympics were the most polluted games ever, researchers say”

The global perception of the Los Angeles region will be tarnished if the area still has the worst air pollution in the US despite bragging about environmental stewardship and fighting climate pollution. It doesn’t have to be this way. A better image will be if the Los Angeles area can simultaneously tackle air and climate pollution from the most significant sources in the region –big rig heavy duty diesel trucks.

1. Urgency – Every day and every life matter
2. The oldest 8,000 port trucks will be banned by 2023
3. Failure to meet attainment means billions in penalties

2020 in Review: The Year of Essential and Sustainable RNG
CalPortland® Commissions CNG Fueling Hub and Near-Zero Bulk Hauler Fleet
Clean Energy’s Redeem™ RNG Hailed as a Win-Win for the NY MTA and the Environment
Transforming the Transportation Industry