Soon the Ports of Los Angeles and Long Beach will adopt policies that determine the future of port trucks. Some stakeholders will argue for policies that prioritize business and port competitiveness over health. Others will advocate for policies that only focus on a zero emissions future. Ironically, these positions both perpetuate the status quo of old diesel trucks and their associated emissions of air and climate pollutants.

In the second of a three-part series, Clean Energy Vice President Greg Roche, explains the reasons why we need to immediately deploy this advanced clean technology:

4. Urgency – Every day and every life matter
5. The oldest 8,000 port trucks will be banned by 2023
6. Failure to meet attainment means billions in penalties

Read Part I of the series here.

4. Urgency – Every Day and Every Life Matter

Air pollution and the climate crisis are problems that exist today. These issues are not looming off in the future. People are suffering today, and the planet is in danger now. We simply cannot afford to wait to see if better solutions come along some day.

The importance and wisdom of immediate reductions were studied in the ACT Now Plan. The study compared NOx emissions reductions under two scenarios. One scenario waited for zero emission trucks to penetrate the market under optimistic assumptions. The other scenario acted to immediately deploy ultralow-NOx trucks. The wait-for-zero path never achieves the emissions reductions of taking immediate action today. 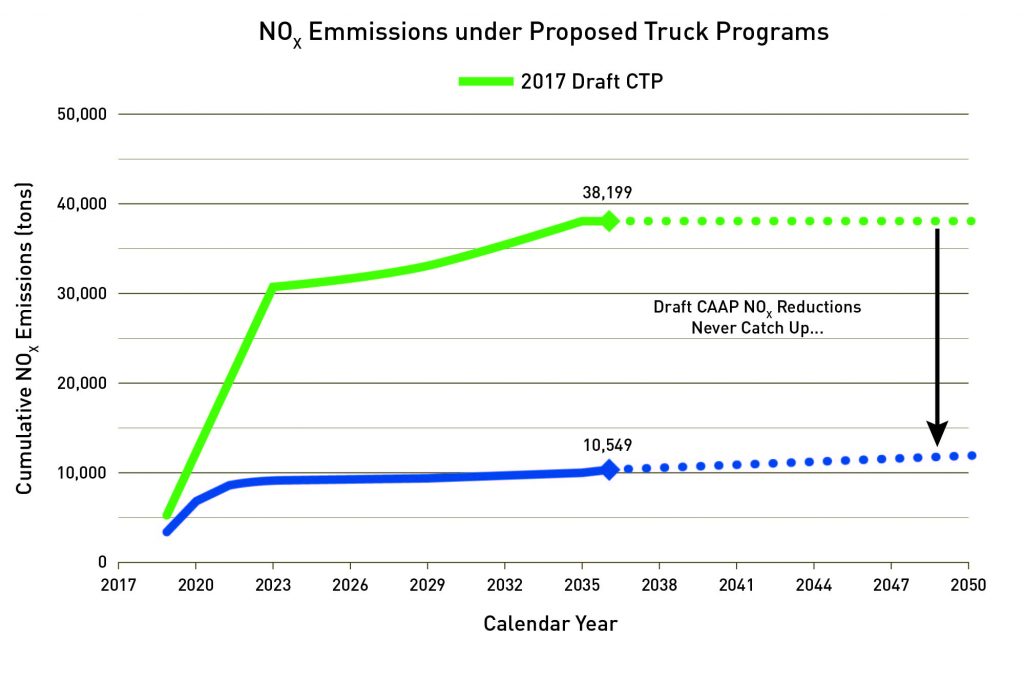 Calls for action routinely appear in the media, such as this headline from the New York Times: “Bleak’ U.N. Report Finds World Heading to Climate Catastrophes.” This report says that global emissions have increased by 1.5 percent each year for the past decade but need to decline by 7.6 percent every year between 2020 and 2030 to avoid the worst impacts of climate change.

Perhaps this article in The Guardian says it best about the urgency to fight climate change, or what is now being called the climate crisis: “But the climate crisis doesn’t work like that. If we don’t solve it soon, we will never solve it, because we will pass a series of irrevocable tipping points – and we’re clearly now approaching those deadlines.”

The most important emissions reductions, whether air or climate pollutants, occur today and not off in the future. Failing to act today is failing our current generation of citizens and future generations because of political decisions that essentially withhold the solution. We cannot afford to let the perfect be the enemy of the good – Voltaire.

The CARB Truck and Bus Regulation seeks to reduce emissions of toxic air contaminants (TAC) from diesel exhaust. Diesel exhaust is responsible for 70% of TAC emissions. Port trucks that are older than 2010 will be banned on January 1, 2023.

The Port of Los Angeles reports that there are 7,917 trucks older than 2010 that service the ports. This is 45% of the port truck population and they perform 46% of all truck moves. These trucks will be replaced because of the CARB ban. The question is what will replace these trucks? They will either be replaced by used diesel trucks that are newer but still polluting, or they can be replaced by advanced clean technology trucks. Replacing these trucks over the next 3 years is a once-in-a-lifetime opportunity to break the stranglehold of diesel on port trucking. This opportunity cannot be missed.

Federal regulations set limits on air pollution. Reaching attainment with federal air quality standards is serious business, not only for the sake of health but the sanctions that the federal government can impose. Our region faces a major attainment deadline by 2023, yet our region is not even close to achieving attainment by the deadline. According to South Coast Air Quality Management District (AQMD), 40% of the days over the past three years have exceeded federal air quality standards.

AQMD produced a summary of sanctions that apply if the region fails to meet the federal 1997 8-hour ozone standard in 2023. The summary maps out sanctions for two scenarios. The primary difference between the two scenarios is the start date for imposing sanctions. The sanctions are summarized below. Yes, these sanctions do say no drive days, gas rationing, and caps on air travel. These are serious consequences and failure to achieve attainment needs to be taken seriously.