Redeem became commercially available in 2013 and is derived from capturing biogenic methane that is naturally created by the decomposition of dairy, landfill, and wastewater treatment plant waste. As a vehicle fuel, Redeem enables at least 70 percent reduction in carbon emissions when displacing diesel or gasoline.

More fleets are transitioning to natural gas-powered vehicles (NGVs) for their performance, cost savings, environmental advantages and extensive nationwide fueling network, with sales this year on an upward trajectory. As of May, year-to-date sales of NGVs surged 43 percent, according to ACT Research, and were also up 10 percent from April’s numbers.

Long-time customer and an early adopter of Redeem, the Big Blue Bus in Santa Monica has extended its contract with Clean Energy with an anticipated 2.3 million gallons of Redeem per year to fuel its 200 municipal buses.

Big Blue Bus transports 44,000 passengers daily across a 58-square mile service area. Nationally recognized for its long-standing commitment to a cleaner environment, the entire fleet operates on alternative fuels, including liquefied and compressed natural gas (LNG/CNG), which helps to cut emissions by over 70 percent.

“We’re proud to continue our partnership with Big Blue Bus and share its commitment to sustainability. Their natural gas buses are providing healthier air for people in and around Santa Monica and the use of Redeem is significantly reducing greenhouse gas and long-term climate change issues,” said Chad Lindholm, vice president, Clean Energy.

Fleets in the Ports of Los Angeles and Long Beach, the largest port complex in America, are taking delivery of 102 new near-zero trucks fueled by Redeem.

With funding made available by the Carl Moyer Grant Program and other grant programs, port trucking companies are rolling out trucks equipped with the new Cummins-Westport (CWI) near-zero ISX12N natural gas engine. The ISX12N is certified by California Air Resources Board (CARB) to reduce smog-forming NOx emissions by 90 percent compared to the current engine standard.

“Fortunately for those who live in the area of the Ports of Long Beach and Los Angeles, more near-zero trucks are operating on RNG which will help combat air pollution in Southern California,” said Lindholm. “These near-zero natural gas trucks can have a huge positive impact on the environment and provide the level of performance that fleet operators expect.”

Among the fleets taking delivery is Green Fleet Systems, which has committed to 20 near-zero trucks and RNG fuel at a fixed price well below diesel.

TTSI is starting to take delivery of 40 near-zero trucks under Clean Energy’s Zero Now Program, which makes the cost of leasing or purchasing a new natural gas heavy-duty truck equal to the price or even lower than that of the same truck equipped with a diesel engine. In addition, truck fleets financed or purchased through Zero Now can purchase natural gas fuel at a fixed price significantly discounted to diesel.

Other companies that have or will be taking delivery of near-zero trucks include Tradelink Transport, Green Trucking, Overseas Freight, West Coast Trucking, Supra National Express, and MDB Transportation, a division of AJR Trucking. 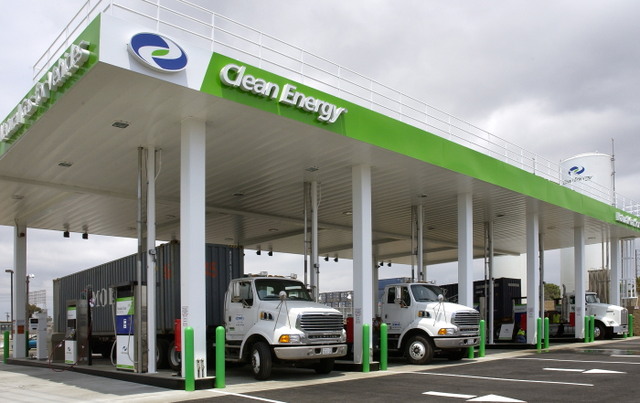 Private transit contractor, Transdev has signed an agreement with Clean Energy to build a private fueling station in Los Angeles for dispensing existing contracted volumes of an estimated 2.8 million gallons of Redeem.

Omnitrans has selected Clean Energy to provide operations and maintenance services for its two CNG stations, which dispense a combined annual 3.5 million gallons. Clean Energy will be the agency’s exclusive provider for up to five years.

Clean Energy has signed a significant station upgrade agreement for long-time customer Alameda County Industries (ACI). The upgrade is expected to accommodate the addition of approximately 50 new refuse trucks that are scheduled to service ACI’s newly awarded municipal solid waste collection contracts with the cities of Castro Valley and San Ramon. ACI anticipates the fleet will consume 300,000 incremental gallons of Redeem annually. Clean Energy constructed the original station in 2014 and is scheduled to complete the upgrade by the end of 2019.

Burrtec Waste Industries (Burrtec) signed a 7-year O&M contract extension for its CNG fuel stations located in Fontana and Santa Clarita. The agreement also incorporates Burrtec’s CNG fuel station located in Azusa, which was previously not maintained by Clean Energy. The three stations support the fueling operations of over 130 natural gas refuse trucks and are expected to deliver over 9 million gallons throughout the life of the contract.

The City of Tacoma has signed a multi-million-dollar CNG equipment supply contract with Clean Energy to build a new private station. The station is scheduled to be completed in early 2020 and is designed to fuel 75 municipal refuse trucks. The City also extended Clean Energy’s maintenance contract for the existing station.

The City of Redlands awarded Clean Energy a 3-year RLNG supply contract for an estimated 1.8 million gallons of Redeem for its public access station. The station provides fuel to the City’s 40-truck refuse fleet, along with local refuse trucks and school buses. Clean Energy also received an extension on its existing maintenance contract.

The City of Sacramento has executed a 3-year retail fuel contract for an anticipated 700,000 gallons of Redeem for its growing fleet of 40 refuse trucks.

Clean Energy Fuels Corp. is the leading provider of natural gas fuel and renewable natural gas (RNG) fuel for transportation in the United States and Canada, with a network of approximately 530 stations across North America that we own or operate. We build and operate compressed natural gas (CNG) and liquefied natural gas stations (LNG) stations and deliver more CNG, LNG and RNG vehicle fuel than any other company in the United States. Clean Energy sells Redeem™ RNG fuel and believes it is the cleanest transportation fuel commercially available, reducing greenhouse gas emissions by at least 70%. Clean Energy owns natural gas liquification facilities in California and Texas which produces LNG for the transportation and other markets. For more information, visit www.CleanEnergyFuels.com.

Clean Energy Appoints Karine Boissy-Rousseau to Board of Directors